NOTE: This isn’t a particularly funny post. As a deep and introspective writer, I reserve the right to ruminate on the more weighty aspects of existence with no one in particular. For the moment – with you. If you seek unbridled hilarity, move to the next post. If dick jokes are more your thing, rent Louis C.K.

Beauty appreciation is like nudity – its acceptance is 100% contextual. (Admission: Sometimes beauty is nothing like nudity, such as your 1980s math teacher in a circulation-constricting bathing suit). Van Goghs and Rembrandts are worth more than the GDP of many countries, and we openly judge them favorably against Rothkos and Pollacks, if we so desire.

Much of modern art is not necessarily “beautiful” in the traditional sense, but it is still a visual representation we value. We Save the Harp Seals but have pigs for lunch. We step on ugly spiders (or torture them until death with a hair dryer, if you are my brother John) but ooh and ahh over delicate lady bugs and butterflies.

We admire magnificent sunsets, architecture, even shoes. We spend billions per year perfecting our hair, skin tone, eyelashes, brow curves, body curves, toe nails, and crow’s feet. But if we admire all of that effort in someone else – or those who win the genetic lottery and are born with such perfection – we are considered puddle-shallow. That stunning redhead in the svelte navy mini-dress, the dashing gent with a Clooney facial structure and emerald eyes? It’s a no-no to admire them for anything other than their soul, resume, or proficiency at Mandarin and the ukulele. The assumption is also that they’re stuck up or shallow themselves. 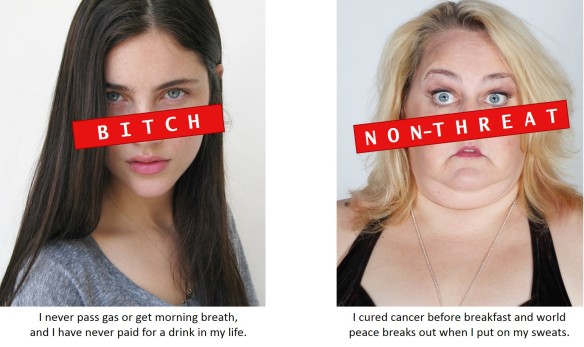 And yet what is the first question people ask about a potential blind date? “Are they generous and intelligent?” Nope. “What do they do for a living?” Nope. That’s second. I’ll bet you a facial peel and bikini wax that it’s, “Are they hot?” How many women are jealous of another woman’s philanthropic record or ability to play a Beethoven sonata? If women carp at each other out of insecurity, it’s usually because the jealous one has smaller breasts, wider hips, a saggier anything, or a less Cosmo-friendly face.

Men are more insecure about their income and status, because they perceive women to focus on those areas, which explains why you see gorgeous women with pudgy, average-looking men getting into his Mercedes, but never the other way around. Wealthier men can get hotter women. But these things still have nothing to do with what we are supposed to consider valuable in others.

My suspicion is that people are so insecure about their looks because they are judged so immediately and harshly on them, and they’re not something people can lie about (colored contacts and breast lifts aside). It’s also something that isn’t as subjective as other qualities that someone might admire – such as athleticism, education, or a love of animals. Yes, the self-help section of Barnes and Noble is pretty huge, but most of it is motivational mumbo jumbo to boost your success. Hence the “self.” Every magazine at your average grocery store check-out counter has beauty, fashion, and body tips splattered over the covers. Not to mention Sex Sex Sex moves for your man. Where are the articles on where to volunteer in order to attract a mate? Yup, there are other rags, but I don’t see Utne Reader and The New Republic flying off the shelves (or even on them).

It’s not the supposed shallowness of people’s attitudes toward beauty that bother me, it’s the hypocrisy. It’s time to admit that the same beauty we admire in statues, animals, and flowers is rare but discoverable in the people (and animals, and insects) around us, and it does change the way we view or value all of these things. More than anything, beauty is the most fleeting attribute of a fading youth. Most of us are at our professional and personal peak in our 40s, but already things are beginning to ache, wrinkle, and sag.

It’s true you can’t have an inspiring conversation with someone’s impressive abs, but neither can you kiss and caress someone’s sense of humor. Physical attraction is physical, and you aren’t a jerk for admitting it. So please stop saying that beauty is skin-deep (yes, and paintings are canvas-deep) or that you don’t care about people’s beauty. Not only is it likely false, it’s a sad statement on one’s inability to appreciate the beauty among us.